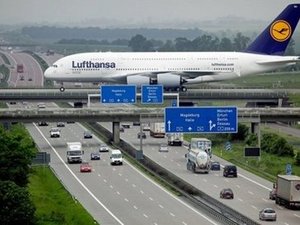 The leading German airline, Lufthansa, forecast Thursday improved operating profit and sales for this year and next even though 2011 "will not be a walk in the park."

For 2010, the Lufthansa group reported an operating profit of 876 million euros ($1.2 billion) on sales that reached 27.3 billion.

"The company expects a further increase in revenue and the operating result, and as things currently stand, the conditions for a dividend payout should also be fulfilled for this year," a statement said.

But Lufthansa chairman Christoph Franz stressed that "2011 will not be a walk in the park."

Competition is getting tougher on routes in Europe and on those to Asia and the Americas, the company noted.

In addition, a German air traffic tax will hit German and other European airlines, and their passengers, "where it hurts."

Finally, the airline has to deal with fuel prices that "are at record levels," as well as the consequences of political unrest, terrorist attacks and natural disasters.

Lufthansa has halted flights to Tokyo for example and is routing passengers via two other Japanese cities amid uncertainty over the extent of the country's nuclear disaster.

The airline released many key 2010 results last week, including a net profit of 1.1 billion euros, compared with a loss of 34 million in 2009.

It has benefited from a rebound in passenger and freight traffic and a large-scale restructuring program has also begun to bear fruit.

Most recently the carrier acquired Austrian Airlines and BMI, and is in the process of turning around their operations as well.