Peres: Lebanon, Syria Must Choose between Iran's Ambitions and Peace 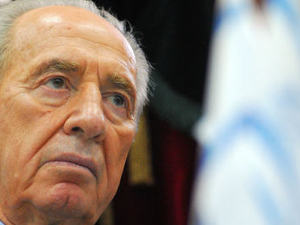 Israeli President Shimon Peres revealed on Thursday that former Syrian President Hafez Assad agreed to personally meet him in 1996 to negotiate a peace deal between the two countries, adding that both Syria and Lebanon must choose between Iranian ambitions and a peaceful Middle East, reported Haaretz on Thursday.

Peres said that in 1996, "following the assassination of [former Prime Minister] Yitzhak Rabin, the Americans communicated a message from Assad senior, in which he expressed his desire to renew peace efforts."

He answered that he was willing to negotiate, reminding Assad that Israel was month away from an election and that an agreement would have to be reached before the elections, it reported.

He then offered Assad to meet "in person in order to start the process. Assad senior said that he was willing to meet, but refused to set a date. That refusal stands to this day," said the newspaper.

Addressing Israel's attitude toward peace talks with current Syrian President Bashar Assad, Peres stated that "when and if President Assad decides determinedly to advance toward peace, he will find a responsible partner in Israel."

"The north, headed by Syria, needs to decide which direction to take: toward Iran's enriched uranium or the iPhones of its younger generation," Peres noted.

He stressed that Israel wanted nothing of both Syria of Lebanon but "true peace, not threats nor incitement,” reported Haaretz.

Peres called out to both Syria and Lebanon, saying: "I say to the Syrian president, choose a path. If you choose peace, we are partners. I say to Lebanon's citizens to decide your future. Be a victim of Iranian ambition, with Hizbullah as its agent, or return to be free sons in the new world."

The Israeli leader added: "We are not your enemies, the land of the cedars and the olive trees of Israel were great neighbors and they are able to grow together."

“Israel would rather enhance our crops than expand our territory. We want a Middle East of peace, of progress, of freedom, of each people and its flag, with all peoples centered on a flag of peace," Peres said.

"Israel has proven that it can withstand war and seek peace as well. It has paid the price of war as well as the price of peace, and it prefers peace," the president added.

The president said that now "an opportunity for peace has been created," urging Israel's neighbors to the north not to "return to bombs and rockets. It is better to cultivate the wonderful fruits of the north and establish an industry of peace instilled in science and technology,” said Haaretz.