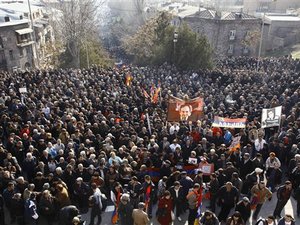 Thousands of protesters occupied a central square in the Armenian capital on Thursday, forcing riot police to withdraw in a show of strength aimed at forcing the government to resign.

After holding a rally attended by more than 12,000 people, demonstrators marched through the city to Freedom Square -- the scene of mass protests in 2008 which ended in violence and left 10 people dead.

Lines of police with shields and batons who had cordoned off the square agreed to pull back without resistance to prevent new clashes.

The opposition is predicting a bloodless "velvet revolution" in what they say is an attempt to emulate mass uprisings in the Arab world, although the ruling party has said it will not submit to ultimatums.

"There is no point in pinning one's hopes on this government because it does not intend to give up a policy that robs our nation, while on the other hand it is unable to push the economy forward," Ter-Petrosian said.

The demonstration was the largest in Armenia since the protests in 2008 against the disputed election of current president Serzh Sarkisian, who the opposition accused of rigging polls in the small, isolated former Soviet republic.

"If Egyptians managed to get rid of their tyrant, we can do the same and get rid of Serzh (Sarkisian) and his regime," a pensioner named Khachatur Sagomonian told Agence France Presse.

Raffi Hovhannisian, the U.S.-born leader of the moderate Heritage party -- the main opposition force in parliament -- had been staging a hunger strike on the square since Tuesday despite it being closed for protests since 2008.

"The symbolic return of the people to the square shows the incumbent president and the opposition that Armenia's future is in the balance," Hovhannisian said after protesters breached the police lines and gathered around the bench where he has been holding his solitary protest.

"All of us must be guarantors for a peaceful transfer of power to the people," he said.

With speeches and Armenian songs blaring in the background, those attending the rally called the event historic for the small Caucasus nation of three million people.

"This is a victory for the people and a defeat for the authorities. The people have shown their strength," unemployed demonstrator Hrach Sarkisian told AFP.

The police said they decided to pull back from the square after urgent talks with protest leaders.

"As a result of negotiations with the protesters, the police authorized them to continue the rally on Freedom Square," a police statement said.

Impoverished ex-Soviet Armenia has gone through political and military turmoil since independence in 1991, with a series of disputed elections and a war with neighboring Azerbaijan over the disputed region of Nagorny Karabakh.

Since the Karabakh war in the 1990s, the country has suffered economically because of closed borders with Azerbaijan and another neighbor Turkey, which strongly objects to Yerevan's campaign to have the World War One-era mass killings of Armenians by the Ottoman Empire recognized as genocide.