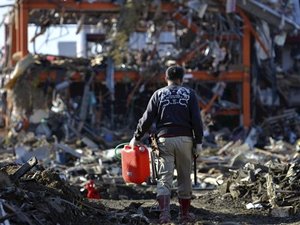 Japan conducted new water cooling operations at a quake-hit nuclear plant Friday, using a fleet of fire trucks as workers racing to avert a catastrophe also ran a power cable to the site.

Tones of water were used to douse overheating fuel rods at the Fukushima No.1 power station, which suffered critical damage in the massive earthquake and tsunami that rocked Japan a week ago.

Air Self-Defense Force chief of staff Shigeru Iwasaki told reporters that six fire engines and one truck were involved in the operation.

The twin disasters knocked out the plant's reactor cooling systems, sparking a series of explosions and fires. Authorities have since struggled to keep the fuel rods inside reactors, and fuel storage containment pools, under water.

If they are exposed to air, they could degrade further and emit large amounts of dangerous radioactive material.

"We poured water onto the number-three reactor yesterday. There is no doubt that water entered the pool, but we have not confirmed how much water is in there," chief government spokesman Yukio Edano told a news conference.

The fuel rod pools at reactors three and four may be boiling and are not fully covered by roofs that would reduce radiation leaks.

Edano put radiation levels Friday at about 100 microsieverts, and that there was no immediate threat to human health. A single dose of 1,000 microsieverts -- one sievert -- causes temporary radiation sickness such as nausea.

Officials at plant operator Tokyo Electric Power Co (TEPCO) said they believed the water-dousing efforts were bearing fruit -- in the face of skepticism from some international experts.

"When we poured water, we monitored steam rising from the facility. By pouring water, we believe the water turned down the heat. We believe that there was a certain effect," a TEPCO spokesman told reporters.

Workers were also continuing with the crucial task of trying to restore power lines, Edano said, in a bid to reactivate the plant's crippled cooling systems.

The nuclear safety agency said early Friday that TEPCO had managed to get a line from a regional power firm into the plant site which would allow it to restore the cooling system.

"The power cable is near. We would like to speed up this operation as we can then use it to speed up the rest of what we have to do," Edano said.

The 9.0-magnitude quake, the biggest on record to strike Japan, knocked down electricity pylons used to supply power to the plant.

Paving the way for a more direct role by the US military, the Pentagon said it had sent a team of experts to evaluate what assistance US forces could provide to the effort to control the situation at the Fukushima complex.

The French nuclear authority has said the disaster equated to a six on the seven-point international scale for nuclear accidents, ranking the crisis second only in gravity to Chernobyl.