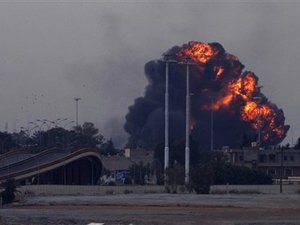 Fighting raged around Libya's rebel stronghold of Benghazi Saturday ahead of a key meeting in Paris to discuss international military action against Moammar Gadhafi's government forces.

The southern edge of the city suffered at least two air strikes and sustained shelling, sending thick smoke into the sky, and a warplane crashed in flames, an Agence France Presse reporter said.

The air strikes came after the Libyan government said it was observing a ceasefire it had announced on Friday, shortly after the United Nations voted to authorize the use of force against Gadhafi's troops to spare civilians.

The rebels, who have been trying to overthrow the Libyan leader for more than a month, said his troops had continued to bombard cities, violating the ceasefire continuously since its declaration.

The government for its part said its armed forces were under attack west of Benghazi and had responded in self-defense.

"The gangs of al-Qaida attacked the units of the Libyan armed forces stationed to the west of Benghazi," a statement carried by the official Jana news agency said, using Tripoli's term for the insurgents.

The statement accused the rebels of using "a helicopter and a fighter jet to bomb the Libyan armed forces in blatant violation of the no-fly zone imposed by the U.N. Security Council."

A warplane was seen coming came down in a residential area of Benghazi with flames emerging from the rear fuselage, triggering celebratory gunfire from the rebels.

The pilot ejected from the aircraft, which was identified as a Russian-built MiG-23 fighter as used by the Libyan air force. However a number of military units defected to the rebellion soon after the revolt broke out.

Earlier two air strikes occurred within 20 minutes of each other, but the planes responsible could not be immediately identified.

A series of small explosions, possibly from Katyusha rockets, also produced at least seven smaller columns of black smoke south of the city.

On Friday evening, residents of Benghazi had braced for an imminent attack, after reports Gadhafi's troops were just 50 kilometers south of the city and planning an evening assault.

In Tripoli, Libya's deputy foreign minister had denied any plans to attack the rebel bastion and said the government forces would not breach the ceasefire.

"The armed forces are now located outside the city of Benghazi and we have no intention of entering Benghazi," Khaled Kaaim told reporters.

Kaaim also called for the immediate deployment of foreign observers, saying otherwise "the accusations and counter-accusations will not stop."

France was to host later Saturday what it said would be a "decisive" summit with the European Union, Arab League and African Union, as well as U.N. chief Ban Ki-moon, on taking military action in Libya.

France's ambassador to the U.N., Gerard Araud, said he expected military intervention within hours of the summit.

Late Friday the French presidency said that France, Britain, the United States and Arab countries had told Gadhafi to "immediately" cease all attacks against his people or face the consequences.

A statement said "that a ceasefire must be put in place immediately, that is, that all attacks against civilians must come to an end".

It added that "Gadhafi must end his troops' advance on Benghazi and withdraw from Ajdabiya, Misrata and Zawiyah," referring to rebel-held towns attacked or captured by government forces in the past few days.

"That is not negotiable," it said, warning that if Gadhafi did not comply with the Security Council resolution 1973, he would face "consequences" from the international community and "the resolution will be imposed by military means".

So far Belgium, Britain, Canada, France, Italy, Norway, Spain, Sweden, Qatar and the United States have said they will help to implement the no-fly zone.