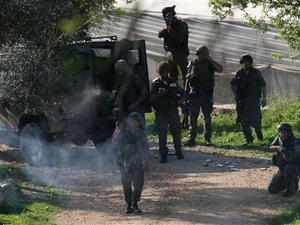 The armed wing of the radical Hamas movement governing the Palestinian territory said it had mounted the attack, which Israel said saw 49 mortar bombs fall on Israeli communities near the border with the Gaza Strip.

The Ezzedine al-Qassam Brigades said they had targeted the border crossing points of Sofa, Kessufim and Nahal Oz.

Palestinian witnesses said some 10 shells had been fired at Sofa.

Israeli army radio said only minor damage was caused but a military spokesman said two civilians had been lightly wounded when three projectiles fell on Pithat Shalom in the Negev desert.

Spokesman Adham Abu Selmiya said a child was among the injured.

The mortar attacks came three days after an Israeli air strike killed two members of the Ezzedine al-Qassam Brigades in Gaza City on Wednesday. Israel said it had targeted a militant training camp in Zeitun.

A statement from the office of Israel Foreign Minister Avigdor Lieberman said he had told the Israeli mission at the United Nations to raise the issue.

It noted that the mortar fire came as Palestinian president Mahmud Abbas, whose Fatah movement controls the West Bank, was stepping up efforts to effect reconciliation with Hamas.

Saturday's barrage took the number of projectiles Israel says Gaza-based militants have fired into its territory since the beginning of the year to past 100.

Israel routinely responds to the rocket and mortar fire with air raids on Gaza.

It carried out a massive 22-day offensive against the territory to stop rocket fire from Gaza from December 2008 to January 2009, which killed 1,400 Palestinians, more than half of them civilians, and 13 Israelis, 10 of them soldiers.

In January Gaza's main militant factions agreed to observe a truce after weeks of increased rocket fire and rising tensions along the border which prompted a warning from Arab leaders that they were risking a major new Israeli invasion.

Gaza's Hamas rulers said they would ensure the "national consensus" truce was observed and deployed forces along the border zone.