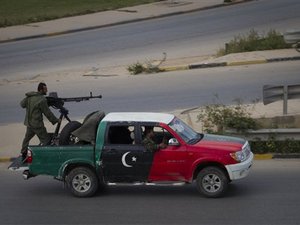 Fighting raged around Libya's rebel stronghold of Benghazi Saturday, with air strikes, shelling and anti-aircraft fire rocking the Mediterranean city as a war plane went down in flames.

Hundreds were seen fleeing the city eastwards amid unconfirmed reports that forces loyal to Libyan strongman Moammar Gadhafi had entered the western suburbs of the city of more than one million people.

Opposition media outlets said Benghazi was coming under attack from the west, as the government for its part said its armed forces were under attack west of Benghazi and had responded in self-defense.