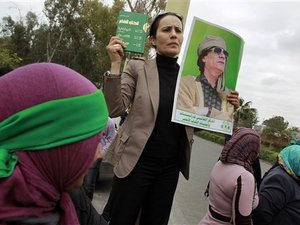 "If you intervene in our country you will regret it," the spokesman quoted him as telling them, adding that Gadhafi had also sent messages to U.S. President Barack Obama and U.N. chief Ban Ki-moon.

Part of his messages said, "I have all the Libyan people with me and they are prepared to die for me -- men, women and children."