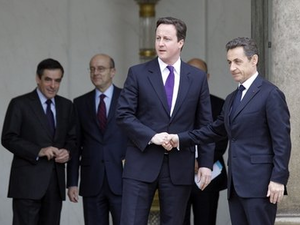 They represent the countries at the forefront of calls for military action in Libya to prevent Moammar Gadhafi's forces attacking rebels, sanctioned by a U.N. Security Council resolution on Thursday.

Their talks are to focus on an eventual sharing of roles in the military action, with the Franco-British led coalition focusing on air strikes, while NATO would implement a no-fly zone for Gadhafi's jets, the sources said.