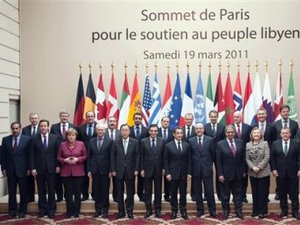 The United States, Britain and France pounded targets in Libya with airstrikes and Tomahawk missiles on Saturday, in a campaign to prevent Moammar Gadhafi from crushing a month-old uprising against his rule.

Libyan state television said a French plane was shot down, as an official in Tripoli denounced the "barbaric aggression" despite its announcement of a ceasefire in a month-long showdown against rebels.

"Today, I authorized the armed forces of the United States to begin a limited military action in Libya," U.S. President Barack Obama said while on a visit to Brazil.

A U.S. military official said the first strikes aimed at imposing a no-fly zone took place near Libya's coast, notably around Tripoli and Misrata, "because that's where the integrated missile defense systems are."

State television said hundreds of people had gathered at Bab al-Aziziyah, Gadhafi's Tripoli headquarters, and at the capital's international airport, ahead of the widely anticipated airstrikes.

"Crowds are forming around the targets identified by France," the television reported, showing pictures of flag-waving people gathering to serve as human shields.

Witnesses told Agence France Presse that several loud blasts were heard east of Tripoli and that "balls of fire" could be seen on the horizon.

Last week, a highly placed French source referred to Bab al-Aziziya, a military air base in Sirte, east of the capital, and another in Sebha in the south as likely targets of a strike.

Russia's foreign ministry expressed regret over the attacks under a Security Council Resolution 1973 which was "adopted in haste," while the African Union, which opposed military action, aims to send a delegation to Tripoli on Sunday.

But British Prime Minister David Cameron said he held Gadhafi responsible for the situation in his country and that "the time for action" by the international community had come.

"Colonel Gadhafi has made this happen. He has lied to the international community, he has promised a ceasefire, he has broken that ceasefire. He continues to brutalize his own people," Cameron told British television.

France said the air strikes would continue through the night.

In the rebel camp, celebratory gunfire and honking of car horns broke out in Al-Marj, 100 kilometers from Benghazi, to welcome the start of military operations against Gadhafi, correspondents said.

As thousands fled Benghazi amid an assault by Gadhafi loyalists earlier on Saturday, French President Nicolas Sarkozy told a summit of world leaders in Paris just hours before the first strikes that France was poised to attack.

But Sarkozy said Gadhafi could still have avoided the worst if he had complied with the Security Council resolution by implementing a ceasefire to allow the diplomatic door to reopen.

U.N. chief Ban Ki-moon, however, said he was troubled by a telephone call from the Libyan prime minister on Friday night.

"He told me that the Libyan government was fully abiding by the Security Council resolution and there will be an immediate ceasefire," said the secretary general.

"But at the same time and overnight they were attacking Benghazi. It is very troubling; whatever they say must be verified."

Since Friday, the Libyan government has insisted it was observing a self-declared ceasefire, shortly after the Security Council voted to authorize the use of force against Gadhafi's troops to spare civilians.

The regime said its armed forces were under attack west of Benghazi, including by rebel aircraft, and had responded in self-defense.

On Saturday, Foreign Minister Moussa Koussa said Tripoli had met all its obligations under the U.N. resolution and asked Ban to send observers to monitor the ceasefire.

But the rebels, who have been trying to overthrow the Libyan leader for more than a month, said government troops had continued to bombard cities, violating the ceasefire continuously.

Gadhafi has defied the threats against, telling Sarkozy and Cameron, main sponsors of the resolution authorizing military action, that they would regret interfering in his country's affairs.

Earlier, a huge plume of smoke rose over Benghazi, Libya's second city, as thousands of people fled eastward after a series of airstrikes and sustained shelling, said an AFP reporter in the metropolis of one million people.

Correspondents redeployed along with civilians to Al-Marj reported that Gadhafi tanks had entered the Mediterranean city by mid-morning.

A warplane crashed in flames in a residential area of Benghazi, triggering celebratory gunfire from the rebels, but an insurgent commander later admitted it was one of theirs and had been shot down by Gadhafi's forces.

Speaking in Brazil, Obama said before the launch of airstrikes that "the people of Libya must be protected and in the absence of an immediate end to the violence against civilians, our coalition is prepared to act."