At Least 5 Killed, 43 Trapped in Pakistan Coal Mine Blasts 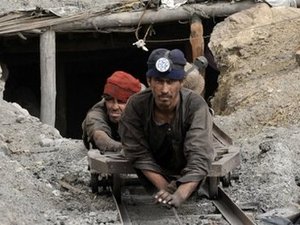 At least five miners were killed and 43 others trapped underground when explosions triggered a collapse in a coal mine in Pakistan's Baluchistan province on Sunday, officials said.

A total of 48 miners were working around 1,200 meters (1,300 yards) underground in the mine and the officials said hopes for the survival of the missing were slim.

The mine in the far-flung Sorange district of the insurgency-torn province was poorly ventilated and gas accumulated, followed by three blasts, they said.

"We have retrieved five dead bodies and are trying to rescue 43 other miners trapped inside but there are less chances of their survival" Mohammad Iftikhar, provincial chief inspector of mines, told Agence France Presse.

The coal mine is run by the state-owned Pakistan Mineral Development Corporation.

Rich in mineral wealth, Baluchistan is plagued by an insurgency blamed on nationalist tribesmen demanding more jobs and royalties from the region's natural resources. Hundreds of people have died in the violence since 2004.

Most coal mines in the impoverished province are notorious for poor safety standards and facilities. Similar deadly accidents have occurred in the past.