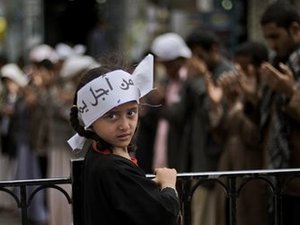 Yemen's human rights minister Huda al-Baan said she has resigned in protest from the government and ruling party after at least 52 people were killed in a sniper attack on demonstrators.

Baan said in a statement late Saturday that her resignation was to protest the "massacre" of demonstrators demanding the departure of President Ali Abdullah Saleh, who has been in power since 1978.

The undersecretary at the ministry, Ali Taysir, also resigned in protest.

Baan became the third Yemeni minister to resign in as many days.

Minister of Tourism Nabil al-Faqih resigned Friday over the "unjustifiable use of force" against protesters, while Minister of Religious Endowments Hamoud al-Hattar resigned earlier in the week.

The chief of the state news agency has also stepped down, along with Yemen's ambassador to Lebanon.

Witnesses said pro-regime "thugs" on Friday rained bullets from rooftops near a square at Sanaa University, which for weeks has been the center of demonstrations calling for the end of Saleh's rule.

Medics said at least 52 people were killed and over 120 wounded in the bloodbath.