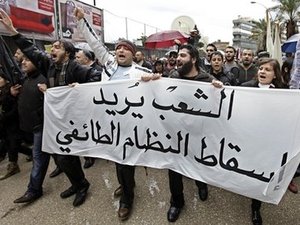 Thousands of Lebanese held a protest in Beirut on Sunday, the third in less than a month, to demand an end to the country's confessional system.

Men and women of all ages set off with children on a march from the residential neighborhood of Ashrafiyeh to the interior ministry demanding "the fall of the confessional regime."

"I am here for the sake of a better future for my children. We are fed up. We want a better Lebanon," said Farah Ismail, a mother of two small children who joined her for the march.

Inspired by the success of uprisings in Tunisia and Egypt, several groups demanding an end to Lebanon's confessional system have sprouted on the social networking site Facebook.

Lebanon's system of government is rooted in a 1943 power-sharing agreement along confessional lines adopted after the country won its independence from France.

Aimed at maintaining a balance between Lebanon's 18 religious sects, the agreement calls for the president to be a Maronite Christian, the prime minister to be a Sunni Muslim and parliament speaker a Shiite Muslim.

Other government jobs are also allocated according to religious affiliation.

"Secular Lebanon against symbols of confessionalism," and "I don't want to change my country, I want to change the system," read some of the banners carried by the marchers.

Protesters said they will continue to hold rallies until they eradicate all signs of confessionalism in Lebanon.