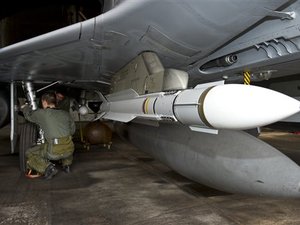 The initial part of an international operation to enforce a no-fly zone over Libya "has been successful" and the government's offensive on Benghazi has been stopped, top U.S. military commander Michael Mullen said Sunday.

The initial part of an international operation to enforce a no-fly zone over Libya "has been successful," Mullen, chairman of the Joint Chiefs of Staff, told ABC's "This Week" program.

"They are no longer marching on Benghazi," Mullen added.

The comments came after the United States unleashed a barrage of strikes against the Libyan regime's air defenses, but ruled out using ground troops in what President Barack Obama called a "limited military action."

In a dramatic show of force, U.S. warships and a British submarine fired at least 110 Tomahawk cruise missiles into Libya against Gadhafi's anti-aircraft missiles and radar Saturday, the U.S. military said.

Earlier Sunday, three U.S. B-2 stealth bombers dropped 40 bombs on a major Libyan airfield in an attempt to destroy much of the Libyan Air Force, U.S. military officials said.

In all, 19 U.S. planes, including the stealth bombers took part in dawn raids Sunday on targets in Libya, U.S. Africa Command, based in Germany, told Agence France Presse.

"What we are doing, with our coalition partners, is the initial phase of an operation to try to create the conditions to be able to set up a no-fly zone," spokesman Kenneth Fidler said.