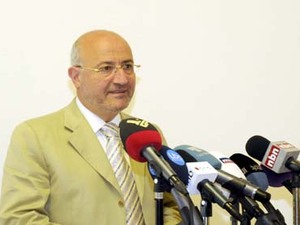 Caretaker Minister Ghazi Aridi said Sunday that a “political decision” was preventing the arming of the Lebanese military with weapons that consolidate it and help it confront Israel.

While Aridi did not say who had taken such a political decision, he stressed that Lebanese leaders should take a “unified stance” that says “no to using arms locally by any side or any team.”

Addressing the March 14 forces, the Progressive Socialist Party official asked: “What should we do? There is no capable state nor you want (Hizbullah’s) arms.”

He said one of the solutions to the controversial issue of Hizbullah’s weapons was the resumption of national dialogue sessions that Speaker Nabih Berri had launched on March 2, 2006 “in an unprecedented move in the history of Lebanese political life.”

Aridi called for the quick formation of the cabinet, which he said is facing local and foreign pressure. The new government “should be in harmony over its choices and political stances.”

He urged unity among the political parties to confront the “foreign pressure” and to prove that the Lebanese are capable of “protecting the country and drawing a policy statement and a work plan.”

Any delay in the formation of the cabinet would reflect negatively on the stability and security of Lebanon, the caretaker minister said adding that the economic and financial situations in the country would also be affected.