Bahrain: Nasrallah's Remarks Harm Ties with Lebanon and its Interests in Gulf 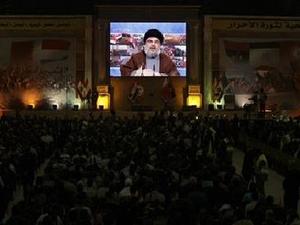 Bahrain held the Lebanese government responsible for Hizbullah leader Sayyed Hassan Nasrallah's latest remarks on the Gulf Kingdom, saying the statements would have a negative impact on ties between the two countries.

Bahrain condemns Nasrallah's "lies and allegations over the events in the kingdom aimed at serving foreign interests," said a foreign ministry statement on Sunday.

It said the Hizbullah leader through his "terrorist speeches" was interfering in Bahrain's internal affairs and attacking its figures and people.

Nasrallah's remarks "do not serve the security and stability of the region and would impact Lebanon's interests in the kingdom of Bahrain and Gulf Cooperation Council countries," the foreign ministry warned.

It vowed that Bahrain's people "would remain united against all those who want to harm our security and stability."

Nasrallah said Saturday that Gulf countries sent troops to Bahrain to "defend a regime which no one is threatening to topple."

"I ask some in the Arab and Islamic worlds: Why have you remained mum over the tyranny against our people in Bahrain, is it only because they are Shiites?" he wondered.