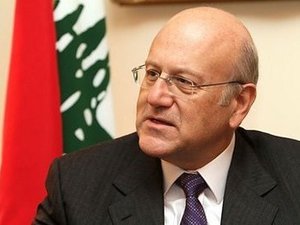 Premier-designate Najib Miqati has stressed that Syria wasn’t interfering in the cabinet formation process and said his efforts were making a “slow progress.”

Asked about reports that March 8 officials were bickering with him over cabinet seats and shares, the prime minister-designate said: “There are (different) points of view and I am seeking to come up with a cabinet line-up that comforts everyone.”

“I am making every effort” to form the government, Miqati told An Nahar, saying in response to a question about the possibility of giving up his mission that he hasn’t despaired.

While reiterating that he “wasn’t pessimistic,” he urged the Lebanese people to “bear (with him) a little.”