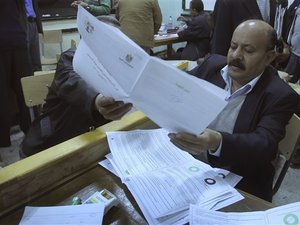 They approved a package of limited changes to the Mubarak-era constitution intended to guide the Arab world's most populous nation through new presidential and parliamentary elections within six months, in a keenly fought referendum.

The United States congratulated Egypt Sunday on its constitutional reforms after Egyptians voted overwhelmingly on a plan to restore civilian rule, a White House official said.

National Security Advisor Tom Donilon said that U.S. officials "want to congratulate the Egyptian people, and the government" on the reforms.

The following are the main changes that were endorsed:

Article 75: The president must be an Egyptian of at least 40 years of age, with two Egyptian parents with no other nationality, and must not be married to a non-Egyptian. The amendment reinforces the existing nationality criteria.

Article 76: Candidates for president must win the endorsement of 30 elected members of parliament; or that of 30,000 registered voters in 15 provinces with at least 1,000 from each one; or be nominated by a political party of which he or she is a member and which has at least one elected seat in parliament. The amendment eases the existing criteria but not enough for many critics.

Articles 76 and 88: Ballot casting and counting will be directly and fully supervised by the judiciary. The amendment restores judicial supervision of the electoral process, which was scrapped in 2005 in a move critics say paved the way for fraud.

Article 77: The president will serve a maximum of two four-year terms. Under the suspended constitution, a president could serve an unlimited number of six-year terms, a provision that cleared the way for Mubarak's three-decade reign.

Article 139: The president will be required to appoint one or more vice presidents within 60 days of taking office. Mubarak avoided naming one until under pressure in the dying days of his presidency.

Article 148: The declaration of a state of emergency by the president will be limited to six months. Any renewal will require a referendum. Mubarak enjoyed emergency powers almost continuously throughout his presidency.

Article 179: This article, which gave the president the right to order military trials for civilians, will be scrapped. Supposedly intended for terrorism suspects, human rights watchdogs say the provision was widely abused.

Article 189: The president or at least half the members of the two houses of parliament will be able to request the drawing up of a new constitution by a constituent assembly of 100 members which will then be put to a referendum. Previously only the president and the speaker could ask for amendments.