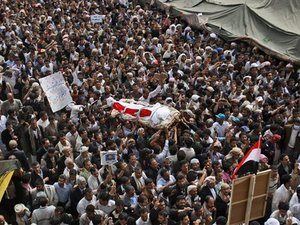 Embattled Yemeni President Ali Abdullah Saleh sacked his government on Sunday as mourners massed in Sanaa to bury many of the 52 people gunned down by his loyalists, and more regime figures quit over the killings.

Tens of thousands of people turned out for the funerals in what witnesses said was the largest gathering of Saleh's opponents since protests against his autocratic regime erupted in late January.

About 30 bodies were laid out in rows, and the square near Sanaa University overflowed with mourners who gathered under tight security and despite the state of emergency.

On Friday pro-Saleh snipers on rooftops raked demonstrators in the square with bullets in an attack which more than doubled the death toll from several weeks of unrest to around 80.

The violence drew condemnation from the United Nations, the European Union and the United States, which sees Saleh as a key partner in battling al-Qaida in the region.

Saleh suffered a further blow with the resignation on Sunday of Yemen's ambassador to the United Nations, Abdullah Alsaidi, and human rights minister Huda al-Baan in protest at the deadly attacks on demonstrators.

"Abdullah Alsaidi has submitted his resignation to protest at the use of violence against demonstrators," a foreign ministry official said.

The defections add to a long list of resignations, including two other ministers and 23 MPs who have ripped up their membership of Saleh's ruling party.

In an apparent attempt to placate the opposition the president sacked his government on Sunday.

"The president has dismissed the government but asked the cabinet to remain in a caretaker position until a new one is formed," the official Saba news agency reported.

In Cairo, U.N. chief Ban Ki-moon said sacking the government was not the solution to violence in Yemen.

"I am not sure that the sacking of this cabinet would be the one which honors the expectations of the people," Ban said of Saleh's move.

Ali Abed Rabbo al-Qadi, the head of the independent parliamentary bloc who was in the crowd, said those responsible for the killings must be "held responsible for every drop of blood that has been shed."

Yemen's embassy in Washington in a statement said the chief prosecutor in Sanaa had begun to "investigate and question 17 suspects accused of orchestrating the shootings."

Leading Muslim clerics called on Yemeni soldiers to disobey orders to fire at demonstrators, and blamed Saleh -- in power since 1978 -- for Friday's slaughter.

They also demanded that Saleh's elite Republican Guard be withdrawn from the capital.

Saleh had declared Sunday a national day of mourning for the "martyrs for democracy," while blaming the opposition for "incitement and chaos" that led to the killings.

The opposition says the president must resign this year, but he has refused to leave until his current term expires in 2013.

He has also offered to devolve power to parliament under a new constitution, a pledge rejected as "too late" by the opposition which says the president cannot be trusted.

Rights activists have said Washington should reconsider its military aid to Yemen, where U.S. Special Forces are helping to train local anti-terror units engaged in the fight against al-Qaida's Yemen-based offshoot.

Yemen is the suspected hideout of radical U.S.-Yemeni cleric Anwar al-Awlaki, an alleged al-Qaida leader described by a senior U.S. security official as "probably the most significant risk" to the United States.