Death Toll Up to 24 in Pakistan Coal Mine Blast 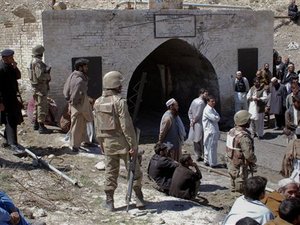 The death toll from a coal mine collapse in Pakistan has risen to 24 with another two dozen still missing, officials said Monday, fearing it will need a "miracle" to find any survivors.

"We have recovered 24 bodies -- 24 miners are still trapped inside," the secretary of mines and minerals for the insurgency-torn Baluchistan province, where the accident took place, told Agence France Presse.

"We are trying our best to rescue them but it will be a miracle if they survive," Mushtaq Raisani added.

The mine in the far-flung Sorange district of the troubled southwestern province was poorly ventilated, allowing poisonous gases to accumulate and trigger blasts which led to the collapse on Sunday, officials said.

Abdul Raziq, a police officer in Quetta, also said Monday that the chances of finding the trapped workers alive were slim.

The accident took place early Sunday and rescue work continued overnight, Raisani said. "We are hopeful we will complete it today (Monday)," he added.

"They had severe burns, which means that the blasts also caused a fire," Mohammad Iftikhar, provincial chief inspector of mines, told AFP overnight.

He had earlier said the victims died of suffocation.

Rescue work, which had to be briefly stopped on Sunday because some of the emergency crew were knocked unconscious by the noxious fumes, had resumed and military experts and engineers had been called in to help, Raisani said.

"They are removing debris and are trying to clear the way to move forward but we are not able to move forward," he said, adding that the mine operators had ignored previous warnings to stop work at the site.

The mine is run by the state-owned Pakistan Mineral Development Corporation and officials said they will launch an investigation into why the warnings to stop mining were not heeded.

Rich in mineral wealth, Baluchistan is plagued by an insurgency blamed on nationalist tribesmen demanding more jobs and royalties from the region's natural resources. Hundreds of people have died in the violence since 2004.

Most coal mines in the impoverished province are notorious for overseeing poor safety standards and similar deadly accidents have occurred in the past.