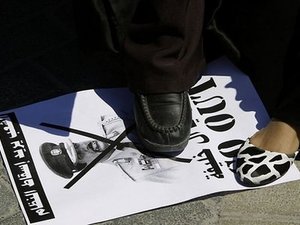 He said there was a "foreign plot being prepared over a period of 30, maybe 20 years... so that if it works in one of the Gulf Cooperation Council countries, it could spread," the king was quoted as saying.

"I announce that this plot has been foiled," he told officers of a Saudi-led GCC force that entered Bahrain last week ahead of a crackdown on pro-democracy protests in the Shiite-majority country that is ruled by a Sunni dynasty.

The so-called Peninsula Shield force was invited into Bahrain to help protect key facilities and not to boost "internal security," the king said, refuting accusations Saudi troops had fired on Shiite villagers.

Tension has heightened between Bahrain and its Shiite neighbor Iran over Tehran's strong criticism of the security forces' bloody crackdown on Shiites in the Arab state.

Around 10 people, mostly Shiite protesters, have been killed in the unrest, which culminated in a police and military assault on a pro-democracy sit-in at Manama's Pearl Square last week.

The United States, the United Nations and other Western countries have deplored the bloodshed in the tiny but strategic kingdom, which hosts the US Fifth Fleet.

Shiite power Iran said Sunday it had asked a Bahraini diplomat to leave in response to the expulsion of an Iranian diplomat from Manama. Both countries recalled their ambassadors last week.

Bahrain's Al-Watan daily meanwhile reported an Iranian diplomat had been given 72 hours to leave the country over "violations" including smuggling arms into the kingdom.

Iranian Foreign Minister Ali Akbar Salehi, in a phone call with his Turkish counterpart Ahmet Davutoglu, on Sunday insisted on "the necessity for foreign forces to leave Bahrain."

Iran officially laid claim to Bahrain for 17 years until 1971, and since the Islamic revolution in 1979 the regime in Tehran has periodically encouraged Bahraini Shiites to rise against their Sunni rulers.