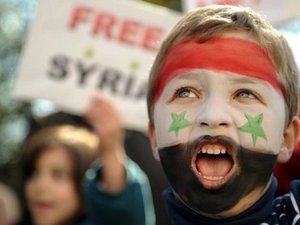 Human Rights Watch Monday accused Syrian authorities of using "excessive force" in a crackdown on anti-regime protesters that killed five people over the past three days.

The U.S.-based rights watchdog said in a statement that "Syria should cease use of live fire and other excessive force against protesters" following the violence in Daraa, 100 kilometers south of the capital Damascus.

"The Syrian government has shown no qualms about shooting dead its own citizens for speaking out," said Sarah Leah Whitson, HRW's Middle East and North Africa director.

"Syrians have shown incredible courage in daring to protest publicly against one of the most repressive governments in the region, and they shouldn’t have to pay with their lives," she said.

Activists said one person had been killed Sunday and at least 100 were wounded when security force opened fire on protesters who went on a rampage in Daraa on the third consecutive day of demonstrations in the town.

They had reported four deaths in the preceding two days.

The protesters, who have been inspired by regime-changing revolts in Tunisia and Egypt, are demanding "freedom" and an end to 48 years of emergency laws in Syria.