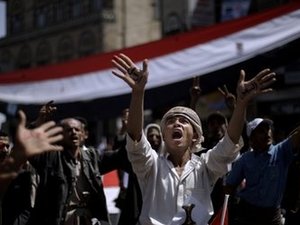 Tanks were deployed in the Yemeni capital on Monday as top generals pledged allegiance to the "revolution" and the country's main tribal leader demanded President Ali Abdullah Saleh's exit from power.

Tanks took up positions in key locations across Sanaa including at the presidential palace, the central bank and the ministry of defense, but it was unclear what their orders were or who was in command.

In the a series of body blows to Saleh's authority, General Ali Mohsen al-Ahmar, an armored infantry division commander, announced he had joined the "revolution," along with tribal leader Sadiq al-Ahmar.

"The crisis is getting more complicated and it's pushing the country towards violence and civil war," the general said in a statement broadcast by Al-Jazeera television.

"According to what I'm feeling, and according to the feelings of my partner commanders and soldiers... I announce our support and our peaceful backing to the youth revolution.

"We are going to fulfill our duties in preserving security and stability."

One by one, dozens of officers of various ranks stood at the tent city near Sanaa University, where demonstrators have kept vigil since February 21 in spite of a wave of attacks, and publicly pledged to support the revolution.

Sadiq al-Ahmar, who leads the Hashid tribal federation, the largest in deeply tribal Yemen and a crucial source of Saleh's power, told Al-Jazeera television it was time for the embattled president to make a "quiet exit."

"I announce in the name of all the members of my tribe that I am joining the revolution," Ahmar said, calling for Saleh "to exempt Yemen from the bloodshed and make a quiet exit."

The governor of the key southern province of Aden, Ahmed Qaatabi, also resigned "to protest what is happening in the county," an aide said.

The defections came a day after Saleh sacked his cabinet in a bid to placate opposition calls for sweeping reforms in the key U.S. ally.

The regime has already lost the support of religious leaders and been weakened by the resignations of ministers, ambassadors and a host of ruling party MPs, but Saleh has refused to stand down until his term ends in 2013.

His regime was internationally condemned after more than 50 people were killed as loyalist gunmen opened fire Friday on protesters in Sanaa's University Square, the centre of the pro-democracy movement.

The defection of top military officers to the opposition is likely to complicate Washington's support for Saleh, whom it sees as a pillar of stability in a volatile country and a partner in the war against al-Qaida.

Yemen is also the suspected hideout of radical U.S.-Yemeni cleric Anwar al-Awlaki, an alleged AQAP leader and described by a senior U.S. security official as "probably the most significant risk" to the United States.

A London court on Friday jailed a Bangladeshi Islamic militant working for British Airways for 30 years for plotting to blow up a U.S.-bound plane after conspiring with Awlaki.

As Saleh clung to power, there were unconfirmed reports that several ambassadors had also pledged their support to the "revolution," in what could be the endgame of a long and bloody period of unrest in the strategic state.

The country's ambassador to the U.N. and human rights minister resigned on Sunday in protest at the brutal treatment of peaceful protesters.

Politicians and civil society leaders joined in a massive funeral procession in Sanaa on Sunday for some of those killed last week, in what amounted to the biggest anti-regime demonstration since the protests began in late January.

U.N. Secretary General Ban Ki-moon on Monday strongly condemned the use of live ammunition against demonstrators in Yemen, and repeated international calls for dialogue and restraint.

"The Yemen government has an obligation to protect civilians. I call for the utmost retrain and end to violence," Ban told reporters following talks with Arab League chief Amr Mussa in Cairo.

"There is no alternative to an inclusive dialogue on political, social and economic reform to address Yemen's political crisis."