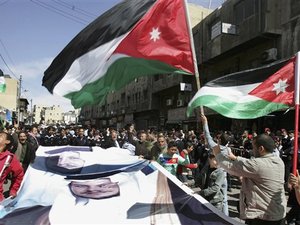 Jordan's Islamists urged King Abdullah II on Monday to carry out reforms similar to measures taken this month by his Moroccan counterpart, saying there was no need for a dialogue commission.

"The king of Morocco (Mohammed VI) is an example to follow. He has announced reforms unilaterally and they are satisfactory."

Mohammed VI announced comprehensive reforms on March 9 including greater independence for the judiciary, enhanced powers for the prime minister, and the separation of powers, in an apparent move towards a constitutional monarchy.

But five of those, including the Islamists and a political activist, refused to take part in the panel, which held its first meeting on Saturday.

"We are ready to join the dialogue commission if it is ready to discuss constitutional reforms, which are essential to empower the people, particularly through a parliamentary government," Bani Rsheid said.

Senate president Taher Masri, who heads the committee, declined to comment on the Islamists' demands, but told AFP the panel plans "within two weeks to go to different governorates for consultations on amendments of the electoral and political parties laws."

The IAF, the political arm of the Muslim Brotherhood, said they "feel that the regime is unwilling to make reforms."

"The regime is stalling for time and trying to keep the public preoccupied," Bani Rsheid said.

"That is why we are determined to continue the pressure until the regime responds."

He added that young people "from all sectors, including the Islamist movement, will begin from Thursday a protest movement in the interior circle" in central Amman.

The IAF and other groups have been calling for sweeping reforms, including a new electoral law that would lead to a parliamentary government and elected prime minister rather than appointed by the king.

Jordanians, inspired by the revolts in Tunisia and Egypt, have held protests since January demanding change.