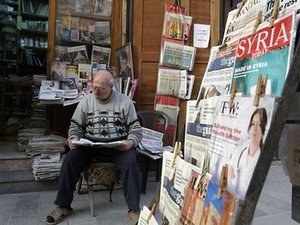 Thousands of Syrians marched Monday in the southern town of Daraa after the funeral of a protester killed in the previous day's demonstration inspired by revolts in Tunisia and Egypt, a resident said.

The resident said "a mass of demonstrators started to march from the cemetery towards Al-Omari mosque after the burial" of Raed Akrad, who was killed by security forces on Sunday when they used live ammunition to break up a protest.

"Just God, Syria and Freedom," and "Revolution, revolution" chanted the demonstrators, according to the resident who also saw security forces stationed at the entrance of the town as it entered its fourth day of protests.

Meanwhhile, France on Monday again condemned the crackdown on demonstrators in Syria and called for the release of all detained protesters.

"France condemns violence that claimed several lives and injured many among the demonstrators who gathered on Friday, Saturday and Sunday in Deraa," foreign ministry spokesman Bernard Valero told a press briefing.

"France calls on the Syrian authorities to free all persons detained for taking part in demonstrations because of their opinions or their actions in defending human rights," he said.