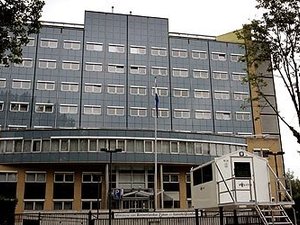 In an interview with Lebanese daily Sada al-Balad to be published Tuesday, Thorold noted that Fransen and his small team were reviewing as quickly as possible the amended indictment and tens of thousands of pages of supporting material, while being keen on integrity and justice.

Thorold stressed that the tribunal’s Rules of Procedure and Evidence do not stipulate a deadline for the pre-trial judge to assess a filed indictment.

He reminisced that STL President Antonio Cassese had noted in the STL 2nd Annual Report his “desire for investigations to be completed and for all indictments to be submitted to the Pre-Trial Judge by the end of February 2012.”

Thorold noted that Cassese’s statements highlighted the fact that submitting more than one indictment was an ordinary procedure in all courts and judicial bodies around the world.

On March 11, the Office of the Prosecutor announced that Bellemare filed an amended indictment for confirmation by Pre-Trial Fransen "as a result of the gathering and analysis of further evidence.”

"This amendment expands on the scope of the indictment filed on January 17, 2011 in connection with the attack on former Lebanese Prime Minister Rafik Hariri and others on February 14, 2005," the OTP noted.