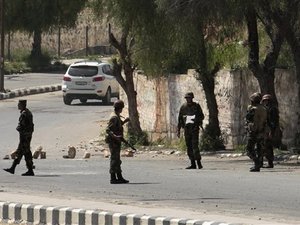 An exiled cousin of Syrian President Bashar al-Assad warned his regime Monday it only had a "small window of opportunity" to introduce reform or face being overthrown by a mounting protest movement.

"You have to move very quickly. This is a very small window of opportunity," Ribal al-Assad, head of the London-based Organization for Democracy and Freedom in Syria, urged the Middle East state in an interview with Agence France Presse.

"Otherwise things will happen like in neighboring countries," the 36-year-old added, referring to the popular protests that have swept the Arab world and toppled governments in Tunisia and Egypt.

His warning came amid escalating demonstrations in Syria, where on Monday thousands defied security forces to march in the southern town of Daraa, which has become the unexpected flashpoint for the country's protest movement.

A heavy-handed crackdown by security forces has so far left six dead.

Assad further blasted what he said were efforts by the Syrian regime to blame him for being behind the protest movement from his exile in Britain. He claimed a Syrian television channel had reported he was encouraging the protests.

"This is completely crazy. They should stop lying to the people, stop making up stories," he said, stressing the demonstrations were spontaneous.

"Instead of always blaming someone, they should be working on answering peoples' demands."

Assad stressed that he was not calling for a revolution and wanted peaceful change.

All political prisoners should be released, emergency laws -- in force in Syria for 48 years -- should be lifted, and moves towards the creation of a national unity government must begin, he said.

"We are not demanding anything that is not our right. We are demanding much less than people in other countries were demanding," he said.

Assad is the son of Rifaat al-Assad, the brother of late president Hafez al-Assad. He went into exile in 1984.