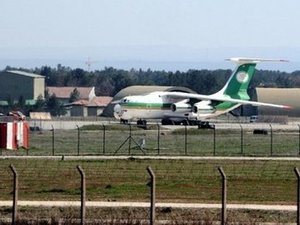 The Turkish authorities have seized rifles on a Syria-bound Iranian plane, grounded since the weekend, and questioned its seven-man crew, police and judicial sources said Tuesday.

The cargo plane, a civilian Ilyushin, was ordered to land in Diyarbakir, in Turkey's mainly Kurdish southeast, on Saturday night on suspicion that it had military or illicit cargo on board.

The plane had declared a cargo of spare car parts, but the inspection resulted also in the discovery of a box containing automatic rifles, a police source told Agence France Presse, without providing further details on the guns.

The crew was taken to a police station for questioning and argued that the weapons were on board as part of routine security measures, declining to give additional information, the source said.

An "administrative" probe has been launched to see whether the presence of weapons on board complied with international rules, a judicial official said, adding that no criminal charges were to be pressed against the crew.

The authorities confiscated the weapons and were expected to allow the plane to take off en route to Syria.

A Turkish foreign ministry official described the search of the plane as a "routine" procedure under "an over flight permission with the condition of technical landing." He would not give other details.

The private Dogan news agency had reported earlier that the crew was detained following the discovery of weapons and ammunition on board.

The Turkish authorities forced another Syrian-bound Iranian plane to land in Diyarbakir on March 16.

After a search lasting several hours, the plane was found to be carrying 150 tons of food but "no material contrary to international standards," security sources said.

The Turkish daily Aksam reported Tuesday that the planes were forced to land on a request from the United States on suspicion that they carried "nuclear material and weapons".

The U.N. International Atomic Energy Agency has been probing allegations since 2008 that Syria has been building an undeclared reactor at a remote desert site called Dair Alzour, which was bombed by Israeli planes in September 2007.

The U.N. Security Council has imposed sanctions, including an arms embargo, on Iran over its refusal to halt its uranium enrichment program which the West suspects masks a drive to build nuclear weapons.