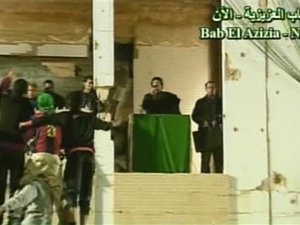 Libyan leader Moammar Gadhafi defiantly claimed in TV comments aired on the fourth day of U.N.-backed military strikes on Libya that his country is "ready for battle," while Western leaders Wednesday planned their next steps.

"We will win this battle," footage showed Gadhafi telling supporters at his Bab Al-Aziziyah compound in Tripoli that was the target of a coalition missile strike.

Early Wednesday, CNN reported that coalition airstrikes were launched overnight near the city of Misrata, east of Tripoli.

Rebels said they had been under intense attack in their Misrata enclave, which has been besieged by Gadhafi's forces for weeks, with four children killed on Tuesday.

Meanwhile, U.S. President Barack Obama, due in Washington on Wednesday after cutting short a Latin American trip, said he expected "clarity" on the future command structure of allied military operations "over the next several days."

Obama said there has been a "significant reduction" in U.S. military flights over Libya as Western allies try to establish the U.N.-approved no-fly zone aimed at protecting Libyan civilians.

Fighting raged between forces loyal to Gadhafi and insurgents on Tuesday, and despite Gadhafi's boasts, there were reports the Libyan leader may be looking for a way out of the conflict.

U.S. Secretary of State Hillary Clinton told ABC News that people close to Gadhafi have been contacting Libya's allies worldwide to see how they can "get out of this."

"We've heard about... people close to him reaching out to people that they know around the world -- Africa, the Middle East, Europe, North America, beyond -- saying what do we do? How do we get out of this?" she said.

But as a senior U.S. officer said Gadhafi forces were still attacking civilians, doubts persisted over the best way to continue the campaign to confront the regime.

Coalition forces, led by the United States, France and Britain and including some other European states and Arab country Qatar, are acting under U.N. Security Council resolution 1973 authorizing "all necessary means" to protect civilians.

There is coordination but no unified command, and moves to hand over control of the operation to the North Atlantic Treaty Organization are dividing the alliance.

NATO ambassadors resumed talks on Tuesday after "very difficult" discussions on Monday that failed to overcome their divisions.

Destroying radar and missiles under Gadhafi's control would pave the way for a no-fly zone that could be patrolled by combat aircraft, with the United States assuming a supporting role, U.S. Defense Secretary Robert Gates said in Moscow.

The Pentagon said Tuesday that the United States had flown 212 aerial missions against Libya, while coalition allies had conducted 124 such missions.

French Foreign Minister Alain Juppe said future actions of the coalition, which began air strikes on Saturday on Gadhafi military installations, depend in part on the embattled Libyan leader.

"The military operations could stop at any moment. All it would take is for the Tripoli regime to adhere precisely and completely with U.N. Security Council resolutions, and to accept a genuine ceasefire," Juppe said.

Washington on Tuesday placed sanctions on 14 firms controlled by Libya's National Oil Corp, to cut off sources of funds for the Kadhafi regime.

The conflict in Libya continued to press the markets, after forcing the shutdown of more than three-quarters of the country's oil production.

In New York, crude for April delivery closed at $104 dollars a barrel, up $1.67, while in London Brent North Sea crude for delivery in May rose 74 cents to $115.70. Crude rose in Asian trade Wednesday as the unrest stoked supply fears, analysts said.

Oil-rich Libya was producing 1.69 million barrels a day before the conflict, according to the International Energy Agency. It is now producing 400,000 barrels a day.