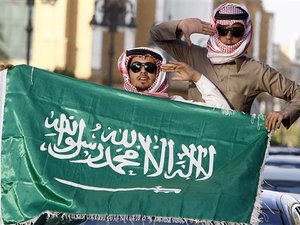 Saudi Arabia is to hold municipal elections from April 23 at a time of pro-democracy uprisings across the Arab world, the official SPA news agency announced.

"A committee has been formed... to oversee next month’s municipal council elections," it said in an official announcement late on Tuesday, adding that polling by regions would kick off on April 23.

The oil-rich absolute monarchy held landmark first men-only municipal polls in 2005, when Saudis elected half the members of 178 municipal councils across the Gulf state.

The government in May 2009 extended the mandate of the councils by two years, postponing a second vote expected to have taken place that year.

Women in the conservative Muslim state were not allowed to run as candidates or to vote in the 2005 elections, the first in the highly-centralized monarchy where all government posts are appointed.

King Abdullah last week announced unprecedented economic benefits worth nearly $100 billion and warned against any attempt to undermine security in the country, largely spared by the Arab uprisings.

And in late February he ordered social benefits worth an estimated $36 billion, mostly aimed at youth, civil servants and the unemployed.

However, Saudi's oil-rich Eastern Province, where most of its Shiite minority lives, has been the scene of protests, notably last week to show solidarity with protesters in neighboring Shiite-majority Bahrain.