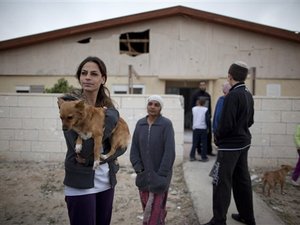 Gaza militants fired seven mortar shells into southern Israel early on Wednesday, just hours after they fired a Grad rocket into the heart of the southern city of Beersheva, the army said.

The seven mortar shells landed in the Eshkol region which lies just northeast of the coastal enclave, causing no injuries or damage, the army said.

The Grad which hit Beersheva landed in the centre of the city, and one man was moderately injured when he was hit by shrapnel in the chest.

Overnight, another Grad rocket had landed near the southern port city of Ashdod, without causing any harm or damage.

The armed wing of Islamic Jihad, the Al Quds Brigades, claimed responsibility for firing both rockets, and said it had also fired three of the mortars into Israel -- all in response to a series of deadly Israeli raids on Tuesday which killed eight.

Four of the victims were Al Quds Brigades' militants. Another of their members was critically injured in an overnight airstrike by Israel, which was launched after the firing on Ashdod.

According to a count by the army, Gaza militants fired nine projectiles into Israel on Tuesday -- including seven mortars, a Qassam rocket and the Grad which hit near Ashdod.

Meanwhile, Israeli Prime Minister Benjamin Netanyahu warned on Wednesday it could take "an exchange of blows" to end the spiraling violence along the Gaza border.

Speaking to MPs at the Knesset, or parliament, Netanyahu vowed that Israel would "aggressively and determinedly" defend its citizens in the face of a sharp rise in rocket attacks from Gaza, two of which slammed into the southern city of Beersheva earlier on Wednesday.