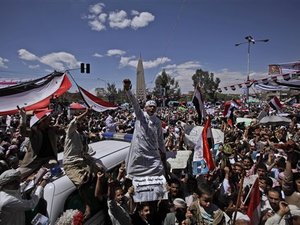 Yemeni MPs on Wednesday approved a state of emergency declared by President Ali Abdullah Saleh who faces escalating demands for his ouster.

In total, 163 MPs out of the 164 who attended a special parliamentary session voted for the measure, announced by the president last Friday, hours after regime loyalists in Sanaa gunned down 52 protesters near the university.

All members of the parliamentary opposition, independent MPs and members of Saleh's own General People's Congress who have resigned boycotted the session of Yemen's 301-seat parliament.

On Tuesday, an offer from Saleh to quit by January, 20 months earlier than planned, failed to appease the anti-regime opposition which has been growing over the past two months.

Saleh, who previously said he would stay in office until his term runs out in September 2013 but not run again, has offered to quit by January after a parliamentary poll, according to a senior official.

His regime has been hit by a wave of defections in the ranks of the military, among influential tribal chiefs, Muslim clerics and senior diplomats as well as within Saleh's party, especially since Friday's bloodbath in Sanaa.

"What they had done to pass the state of emergency is fraud and we reject it," Abdul Razaq al-Hajri of the Islamist opposition Al-Islah (Reform) party told AFP.