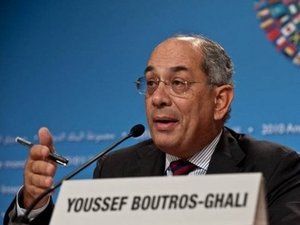 Egypt's stock exchange on Wednesday plummeted nearly 10% after reopening for the first time since January 27 at the start of an uprising that brought down long-time president Hosni Mubarak.

The main EGX-30 index shed 560.87 points to be at 5,085.63 within little more than one minute of reopening, prompting officials to suspend trading for half an hour in line with emergency regulations.

Market official Hisham Taufik was earlier quoted by state news agency MENA as saying trading would be suspended until further notice if it falls 10%.

It had been widely expected to fall Wednesday, with investors concerned by economic turmoil wrought by the uprising, including labor unrest.

But if the reopening had been delayed further, Egyptian companies would have been excluded from the Morgan Stanley Capital International Index, forcing foreign investors to sell their stakes at the earliest possibility.

Leading investment bank Hermes predicts the bourse could fall 20 to 30% in the first few weeks of trading and would recover slowly, depending "on the pace of political developments and the extent of economic recovery".

"We do not expect the Egyptian market to perform as poorly as Pakistan did in late 2008, when the Karachi Stock Exchange reopened after a de facto closure of nearly 60 days, only to fall more than 40%," it said.

"Nor do we expect the strong rebound seen in Pakistan to be repeated in Egypt -- there will still be an FX overhang, in our view, and the global liquidity environment is becoming gradually less favorable."

Finance Minister Samir Radwan said Egypt's transition authorities had been reluctant to open the bourse earlier, because the country's affairs "had not improved as much as we had imagined, although things are improving every day".

Resumed trading was postponed five times since closing two days into the 18-day uprising that forced Mubarak to resign on February 11.

In efforts to stabilize the index, authorities have announced that for the first week the market will only function three hours a day, instead of four.

Economic confidence in Egypt has also been hit by sweeping corruption investigations, which on Tuesday saw ex-finance minister Yussef Boutros Ghali one of the latest to be referred to a criminal court to face charges.

The market's chairman, Khaled Siam, resigned before the re-opening and on Monday, Egyptian Prime Minister Essam Sharaf decreed that Mohamed Abdel Salam would take over on a six-month basis.

Sharaf called on people to contribute "positively" to the bourse and help preserve the exchange "as one of the important economic authorities in Egypt".