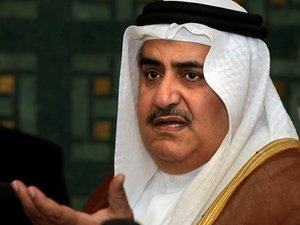 "What is happening in Bahrain is now at a very dangerous stage. There is stability but, we are absolutely afraid of the division between religious communities," Al-Khalifa told in an interview with over-voice translation. Al-Khalifa said Turkey and Bahrain should have a common policy on the division between religious communities in the Islamic world.

The Bahraini foreign minister visited pre-dominantly Muslim Turkey to discuss the unrest in his country.

"We should discuss with our Turkish allies about a common stance for these divisions and conflicts between religious communities," he said.

Bahrain, which is ruled by the Sunni Al-Khalifa royal family, has been rocked by Shiite-led demonstrations.

"In the whole region we should have a strategic agreement on how we would proceed in this transformation process," he said, referring to the uprisings in the Arab world.

But the Shiite-led opposition says it refuses to be coerced into talks, demanding a "correct" environment for negotiations aimed at solving political issues in the Gulf state.