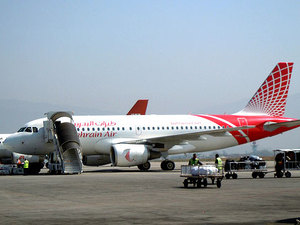 Bahraini airlines have suspended flights to Iran, Iraq and Lebanon, where Shiite communities have criticized the kingdom's response to Shiite-led protests in the Gulf state, the airlines said Wednesday.

On Friday, Bahrain carried out a bloody crackdown on pro-democracy activists demonstrating since February 14 in the tiny Shiite-majority, Sunni-ruled kingdom.

Iran condemned last week's intervention of troops from neighboring Gulf States in support of Manama, while Hizbullah has offered unspecified support for the Shiite-led Bahraini opposition.

And thousands of protesters have turned out in Iraq in shows of support for Bahraini Shiites.

One Gulf Air booking agent told Agence France Presse by telephone that cancellations to Iran and Iraq were due to "operational reasons." Another said: "What we know is that Gulf Air cancelled the flights. We don't know the reason."

But another agent said: "Services have been cancelled by (the) Bahrain government for security reasons. You know the situation in Bahrain ... We don't have (any) idea" when they will resume.

National carrier Gulf Air's website says its operations are "suspended until and including 31 March, 2011" of flights to Tehran, Mashhad, Shiraz and Isfahan in Iran, and Baghdad, Najaf, Arbil and Basra in Iraq.

Gulf Air and budget airline Bahrain Air have both called off flights to Lebanon "until further notice," the official BNA news agency said.

An official of Bahrain Air said the airline does not have services to Iran or Iraq, while the company's website said flights to Lebanon have been called off until at least March 30.