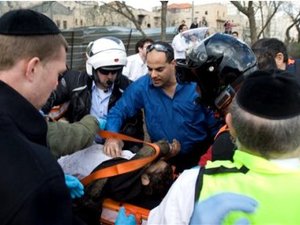 Twenty people were hurt, three of them seriously, when a bomb exploded next to a bus in Jerusalem, medics said, after Gazan militants threatened retaliation for a series of deadly Israel raids.

"The bomb was inside a bag which was left at the bus stop," Israel's Internal Security Minister Yitzhak Aharonovitch told reporters at the scene.

The blast, which shook buildings hundreds of meters away, hit the 174 bus as it stopped to pick up passengers at a stop between the central bus station and the ICC conference center, both of which lie at the western entrance to Jerusalem.

"There are 20 people injured, three of whom are in serious condition, while another four or five are moderately injured," said emergency services spokesman Zaki Heller, adding that no one was killed in the blast.

An Agence France Presse correspondent at the scene saw people lying on the floor covered in blood, and many cars and buses with shattered windows.

Medical officials said many of the wounded were suffering from shrapnel wounds.

Sirens echoed through the city as dozens of ambulances and police cars raced to the scene, a transit hub through which well over a thousand buses pass every day.

Following the attack, Israeli Prime Minister Benjamin Netanyahu slightly delayed his departure for Moscow where he is due to hold talks with Russian President Dmitry Medvedev and Prime Minister Vladimir Putin, an AFP correspondent said.

But he stopped short of cancelling the visit.

The explosion came hours after two Grad rockets slammed into the Israeli city of Beersheva on Wednesday, as Gaza militants vowed to strike deep into the Jewish state after raids killed eight Gazans.

Rising violence in and around Gaza has raised fears of a massive new Israeli operation to stamp out rocket fire from the coastal enclave, which is ruled by the Islamist Hamas movement.

Earlier on Wednesday, Netanyahu had warned it could take "an exchange of blows" to put the militants out of action.

Despite the Grad attacks and the firing of another seven mortar shells, Israel held back from an immediate response, as Netanyahu held consultations with his top military and defense advisers to mull the options, public radio said.

Beersheva is about 40 kilometers from Gaza, and much further away than the Israeli cities regularly targeted by Palestinian militants. This was the first time since the 2008-2009 war that such a projectile hit the center of the city of 186,000 people.

The Al-Quds Brigades, Islamic Jihad's armed wing, claimed responsibility for both attacks as well as for another Grad fired on the port city of Ashdod overnight, and vowed to continue targeting cities deep inside Israel.

"The Al-Quds Brigade has entered a new phase of bombing targets which are further away, where thousands of Israelis live," Abu Ahmad told AFP.

"The stage of targeting Sderot and Ashkelon in southern Israel are behind us," he said, referring to a small town close to the border, and to a port city 18 kilometers to the north.

"From now on, there are no more red lines for the resistance as long as the enemy ... keeps killing civilians," he said.

During the morning, the Israeli air force targeted militants on the eastern side of Gaza City, but no one was injured, Palestinian medical sources said.

Over the past week, there has been a significant increase in Palestinian rocket attacks and retaliatory air strikes in and around Gaza, which on Wednesday prompted Israel's Home Front Defense Minister Matan Vilnai to warn that a fresh war on the Islamist Hamas movement was looming.

"It's only a matter of time until we clash with Hamas again, and again teach them the rules," he told army radio as officials in Beersheva closed schools for the day and urged people to remain close to their bomb shelters.

"I have no doubt that it will happen -- they are taking all the steps leading in that direction."