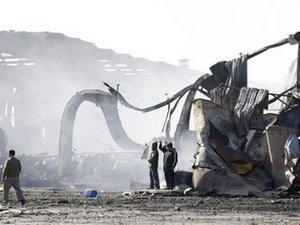 The anti-aircraft gunfire began at around 0430 GMT and there were ensuing explosions, an Agence France Presse reporter said.

As an armada of NATO warships patrolled Libya's coast to enforce an arms embargo against Gadhafi, fresh efforts to hand the alliance command of the military operations collapsed after days of sometimes acrimonious debate.

A NATO diplomat said the 28-nation alliance would try again on Thursday to reach a decision on whether NATO should take charge of the operation launched on Saturday by Britain, France and the United States.

But nations were already hailing the success of the air strikes, with British Air vice Marshal Greg Bagwell saying Libya's air force has been almost totally obliterated and "no longer exists as a fighting force."

U.S. officials are also openly speculating whether the continued pressure will force Gadhafi out of power after four decades in control.

Witnesses also reported a huge blast Wednesday night at a military base in the Tajura residential neighborhood some 32 kilometers east of the capital, while anti-aircraft fire was heard as warplanes thundered over Tripoli.

Although the endgame in Libya remains unclear, U.S. Defense Secretary Robert Gates said during a visit to Egypt that mounting pressure on Gadhafi's regime could encourage his associates or even members of his family to turn on him.

"The French side has taken out a dozen armored vehicles in three days," he told Le Figaro newspaper in an interview to be published on Thursday. "This is decisive as we have practically not seen any tank concentrations since the strikes."

Late on Wednesday, Gadhafi forces using tanks pounded the only hospital in Misrata, which has been besieged by regime loyalists for weeks, a witness and a rebel spokesman said.

U.N. chief Ban Ki-moon again urged all sides in Libya to cease fire as the Security Council prepared to meet on Thursday, a week after clearing the way for action against Gadhafi.

"All those who violate international humanitarian and human rights law will be held fully accountable," Ban's spokesman Martin Nesirky said, mentioning attacks on Misrata and Zintan, also in the west.

In Paris, an envoy from the rebels' transitional council said their objective was a "democratic and secular" regime.

Mansour Saif al-Nasr also predicted that Gadhafi would fall quickly, paving the way for society to be rebuilt. "The Libyan people are a moderate people, and the state will not be led by clerics."

The interim council has 31 members, but the identities of only eight have been revealed since most still live in zones held by Gadhafi loyalists.