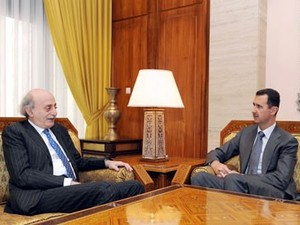 Following his return to Lebanon, Jumblat said in a statement that the meeting was part of the "continuous communication and consultations with the Syrian leadership," describing the talks as "excellent, friendly and frank."

Talks tackled "all the political developments in the Arab region, which is going at this critical moment through major transformations that are apt to create a new stage at all levels," according to the statement issued by the PSP.

Jumblat and Assad "stressed during the meeting the importance of consolidating the atmospheres of stability in Lebanon, which will not remain immune to the repercussions of regional developments."

"The points of view were identical concerning the importance of Lebanon's national unity in safeguarding security and civil peace," said the statement.

"The best way to achieve that goal lies in accelerating the process of forming a new cabinet and overcoming the obstacles hindering formation … and the current political vacuum," it added.

According to the statement, Jumblat and Assad also called for returning to a "calm, rational political dialogue as the only means to address all the current political disputes, away from the atmospheres of tension and fiery, escalatory rhetoric which will only lead to deepening the political rift."

"The current period requires closing ranks, more than ever, and dealing responsibly with the ongoing changes and transformations and their possible repercussions on the Lebanese arena."

For its part, SANA reported earlier that Assad and Jumblat discussed "the developments in Lebanon and efforts to form the government."

The agency added that the talks also tackled the latest developments in the region.

Jumblat visited Damascus last week along with caretaker Public Works and Transport Minister Ghazi Aridi, where he met with the assistant of the Syrian president's deputy.