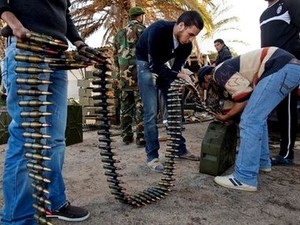 French Foreign Minister Alain Juppe said Thursday that coalition airstrikes against Libya had been a "success" and would continue.

France's defense minister, meanwhile, said intercepted communications showed that some forces under Moammar Gadhafi are wavering in their support of the Libyan leader.

"We will continue with the airstrikes," Juppe told RTL radio, adding that the strikes were "only targeting military sites and nothing else."

He said the air campaign was a "success" and would carry on "as long as necessary."

Juppe insisted the operation was aimed at protecting civilian populations from attacks by Gadhafi loyalists, and denied reports that airstrikes had killed civilians. "It is the exact opposite," he said.

He added that France was in favor of handing over responsibility for implementing a U.N.-approved "no-fly" zone to NATO.

At the same time, however, the coalition led by the United States, France and Britain should maintain political control over the campaign, especially strikes against military installations, he said.

The foreign minister predicted that Gadhafi would soon fall, even if his ouster from power is not part of the enabling U.N. Security Council Resolution's mandate.

"I am convinced that in Tripoli some people (in power) are beginning to ask themselves questions: can we continue with a dictator who -- without being excessive -- is crazy?” he said.

Coalition forces are acting under U.N. Resolution 1973 authorizing "all necessary means" to protect civilians, including enforcing a no-fly zone.

In the context of uprisings across the Arab world, it is difficult to imagine "that a regime embodied by someone like Gadhafi can last long," Juppe added.

"But we think that it is the Libyans that should decide."

French defense minister Gerard Languet, in a separate interview with broadcaster Europe 1, said there were signs that soldiers fighting under Gadhafi realized that there is "no way out."

Over a period of four decades, the Libyan leader "has woven a web of support with soldiers who are tied to his success or failure," Languet said.

"These soldiers are in the process of realizing -- we know this from listening posts -- that Gadhafi has no way out in his struggle. We sense that they are vacillating," he said.

The minister also confirmed that there would be new airstrikes by coalition forces.