Reports: More than 100 Killed in Daraa 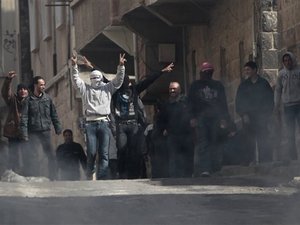 Some 20,000 people gathered Thursday in the Syrian city of Daraa for the burial of victims killed by police gunfire the day before, chanting support for a rising anti-regime movement there, rights activists said.

One activist in Daraa, contacted by telephone, said the mourners made their way from the Omari mosque, where protesters have been holed up for a week, to the burial grounds under pouring rain, chanting: "With our souls, with our blood, we are loyal to our martyrs."

Syrian authorities Thursday told reporters 10 people died in the security forces crackdown on Daraa, a town of 75,000 people that has become a hub for anti-regime protests since March 18.

But rights activists have said at least 100 people were killed by gunfire on Wednesday alone in Daraa, a tribal town at Syria's border with Jordan that has been the focal point of protests demanding the end of the country's ruling regime.

"There are definitely more than 100 dead and the city will need a week to bury its martyrs," said human rights activist Ayman al-Asswad in Daraa, reached by telephone from Nicosia.