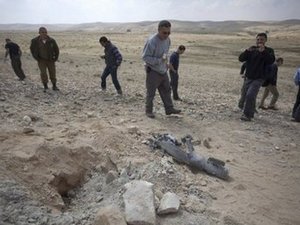 Israeli Defense Minister Ehud Barak warned on Thursday that Israel will not tolerate militant attacks, a day after a bombing in Jerusalem left one dead and as Gaza rockets pounded Israel.

"We have to respond," Barak said at a joint press conference with visiting U.S. Defense Secretary Robert Gates shortly after two Grad rockets slammed into the southern port city of Ashdod.

"Israel will not tolerate these terrorist attacks and we will not allow terror to rise once again," Barak said.

No one was wounded in the strikes which came a day after Gaza's Hamas rulers vowed to rein in unruly militant groups who had vowed to hit ever-deeper into Israel and Wednesday's deadly bus bombing in Jerusalem which also wounded 39 people.

But Israel would have to avoid becoming "victims of our own resolution," Barak added, saying the Jewish state would decide on both the timing and the nature of its military response.

"We keep the right -- how, when and in what kind of amount of firepower or munitions -- to respond," he said.

Gates condemned the rocket attacks as well as the bomb which ripped through a crowded Jerusalem bus stop, as "repugnant acts."

"We underscore Israel, like all nations, has the right of self-defense," he said.