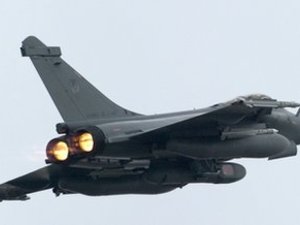 A French fighter jet destroyed a Gadhafi regime warplane on Thursday, apparently as it was landing in the Libyan city of Misrata, a U.S. official said.

If confirmed, the incident would be the first shoot-down of a Libyan fighter since Western powers launched missiles and air strikes Saturday under a U.N. resolution approving a "no-fly" zone aimed at shielding civilians from attacks by forces loyal to strongman Moammar Gadhafi.

At approximately 1140 GMT, "one French Rafale (multi-role fighter jet), after visual identification, fired on and destroyed a Gadhafi regime G-2/Galeb at Misrata," the U.S. official said, referring to the Libyan plane manufactured in the former Yugoslavia and used for ground attack and reconnaissance.

"We believe that the Galeb was landing," the U.S. official said, but stressed that the information was a "first report" and that conditions surrounding the shoot-down remained unconfirmed.