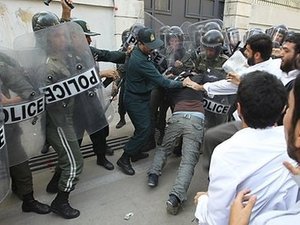 Iran on Friday dismissed the U.N. human rights council's appointment of an investigator to monitor abuses there for the first time since 2002, the state news agency IRNA reported.

"This resolution is unjust, unjustifiable and totally political, and has been approved despite the reticence of certain countries, under pressure from the United States," foreign ministry spokesman Ramin Mehmanparast said.

"The objective of this resolution is to put pressure on the Islamic Republic of Iran ... to divert attention from human rights violations in the West, in particular in the United States," he added.

The council voted by 22 to seven on Thursday to back a European-led, U.S.-backed resolution "to appoint a Special Reporters on the situation of human rights in the Islamic Republic of Iran."

The council regretted "the lack of cooperation on the part of the Islamic Republic of Iran" over recurring human rights abuses in the country following a U.N. General Assembly resolution adopted last December.

The United States, which had been pressing for the appointment, called it a "seminal moment".

Pakistan, which acted on behalf of Islamic states, as well as China, Cuba and Russia, were among seven countries to vote against the resolution, while 14 countries abstained.