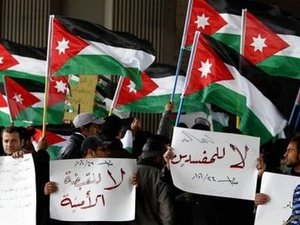 Around 500 young people from different movements, including the powerful Islamist opposition, had camped out in the rain and cold weather to call for reforms to the current regime and for corrupt leaders to be put on trial.

They were camped out next to the Interior Circle, or Gamal Abdel Nasser Square, in the capital.

At nightfall, police attempted to disperse the youths, cutting off electricity to the square around 11:00 pm (2100 GMT), an AFP journalist witnessed.

One of the protesters, Moaz Kassrawi, subsequently told AFP: "A group of nearly 50 loyalists who were gathered not far from them (the students) took advantage of the power cut to throw rocks at the youths.

"Most of those injured suffered head wounds and had to be hospitalized," he said.

According to another witness, police surrounding the scene did not intervene.

"We hold the interior minister responsible for this incident and we call on the king and the people to protect us from these thugs who are attacking us," another of the protesters, Nihad Zouhair, told AFP.

Police spokesman Mohamad Khatib told AFP he was not aware of any casualties.

Hundreds of Jordanian students had started the protest camp on Thursday in response to a call on the social network site Facebook, a tool of many of the recent protests that have sprung up in Arab countries.

They shouted pro-reform slogans and called for corrupt officials to be put on trial.

"The revolution is happening all around us," they shouted: "Jordan, your turn is coming."

"We want constitutional amendments to have parliamentary governments," Alaa Fazaa, of the Jayeen (We are Coming) group, told AFP, adding that the protests would continue until their demands were met.

Since January, left-wing activists have joined forces with nationalists and the Islamist opposition in calling for far-reaching political reforms and an end to what they say is rampant corruption.

The government has formed a national dialogue committee to speed up reforms, but the panel is facing problems after the Islamists and others refused to take part.