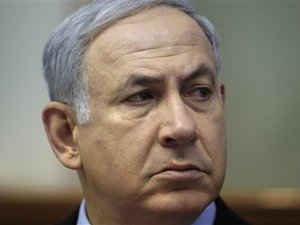 Israel had been "subjected to bouts of terror and rocket attacks," Netanyahu said following a spate of rocket fire on southern Israel from Gaza and a bombing in Jerusalem that killed one and wounded more than 30 people.

"We stand ready to act with great force and great determination to put a stop to it," Netanyahu told reporters before a meeting with U.S. Defense Secretary Robert Gates.

The prime minister said he had received a "very warm" phone call from U.S. President Barack Obama on Thursday expressing his condolences over the latest attacks.

"Any civilized society will not tolerate such wanton attacks on its civilians," he said.

Gates, a former CIA director with years of experience in Washington, said U.S.-Israel security ties were as strong as they had ever been at a time when the region is in "turmoil."

In Tel Aviv on Thursday, Gates said Washington firmly backed Israel's right to respond to the both the rocket fire and the Jerusalem bombing, which he described as "repugnant acts."

But he suggested Israel should tread carefully or risk derailing the course of popular unrest sweeping Arab and Muslim countries in the Middle East.

The U.S. defense chief is pressing Israeli and Palestinian leaders to take "bold action" for peace despite soaring tensions, saying political upheaval in the region offered an opportunity.

After his talks with Netanyahu, Gates is due to head to the West Bank to meet Palestinian Prime Minister Salam Fayyad.

Several regional powers have already urged Israel to show restraint amid fears Netanyahu would order another ground invasion of Gaza.