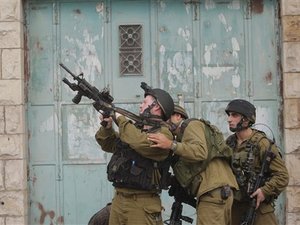 A Palestinian and an Israeli soldier were injured Friday in a scuffle in the Jordan valley region of the occupied West Bank, police said.

"Police lightly injured a Palestinian when they opened fire at him after he tried to snatch a soldier's weapon," spokesman Micky Rosenfeld said, adding that the soldier was hit in the head by stones Palestinians threw at him.

Rosenfeld said the incident took place at a spot designated for soldiers’ hitch-hiking to and from their bases, near the settlement of Tomer, about 15 kilometers north of Jericho.

Police and soldiers are on particularly high alert following Wednesday's bus bombing in Jerusalem, in which a British tourist was killed and at least 30 people injured.