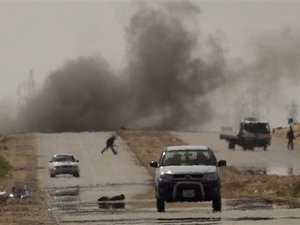 France's Chief of Defense said Friday in a radio interview that he thought allied military operations in Libya would last a matter of "weeks" and hopefully not "months".

"I doubt that it will be (over) in days, I think it will be weeks, and I hope it won't be in months," Admiral Edouard Guillaud told the France Info radio station.

"There will not be, strictly speaking, a situation of getting bogged down militarily because obviously the solution is political," he said.

"Clearly, it is now a matter of finding political solutions, but that's not my domain," he added.

The target, he added, was just outside the city of Ajdabiya, which "is still in the hands of the interim transition council," the fledgling political authority of Libya's opposition.

Along with the United States and Britain, France has since Saturday spearheaded an international campaign of airstrikes in Libya to protect anti-regime rebels from forces loyal to strongman Moammar Gadhafi.

UN Security Council Resolution 1973 authorizes the use of "all necessary means" to protect civilians and enforce a ceasefire and no-fly zone.

The Pentagon has said that 12 countries are now taking part in the coalition, including two Arab nations, Qatar and the United Arab Emirates.