Yemen's Saleh Pledges to Hand Over to 'Safe Hands' 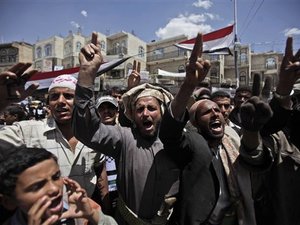 Yemeni President Ali Abdullah Saleh offered to hand over power to "safe hands" but vowed to resist an escalating campaign to force him out of office, in an address to a huge crowd of supporters.

"We will stand firm with you ... steadfast in the face of all challenges," said Saleh, wearing a smart suit and sunglasses as he tries to snatch back the initiative from the opposition.

"We don't want power, we don't need power. But we need to hand it over to safe hands, and not to corrupt and hateful hands," the three-decade ruler told the crowd gathered at a square near his presidential palace.

"You are the ones who will be handed power," he said, to applause from his supporters, carrying Yemeni flags, who he urged earlier this week to turn out for a mass solidarity rally.

Saleh, whose concessions and offers to relinquish power early have been snubbed by the opposition, renewed his invitation for youths at the forefront of the protests to join a dialogue.

"I am ready to talk to you and to form a political party for the youths," said the president, while accusing the opposition of aiming "to reach power over the skulls of martyrs and children."