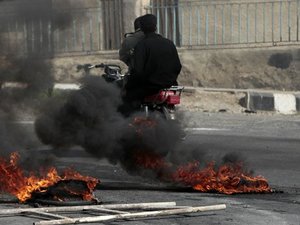 Protests spread in Syria on Friday from their southern epicenter of Daraa to Damascus and a town south of the capital, where authorities moved to arrest at least five demonstrators.

Hundreds of people marched from Omayyed mosque in the centre of Damascus' Old City along Souk Al-Hamadiyeh Street chanting: "Daraa is Syria" and "We will sacrifice ourselves for Syria."

At least five people were taken away by police in plain clothes, according to an Agence France Presse correspondent.

In Daeel, south of Damascus and about 30 kilometers north of Daraa, 300 people marched preceded by motorcycles, shouting: "Daeel and Daraa will not let themselves be humiliated."

Mourners gathered for the funeral of two people killed during clashes with security forces in Daraa, an agricultural city about 120 kilometers south of Damascus, where a security clampdown left 100 dead according to human rights groups.

"With our blood and souls, we sacrifice ourselves for you martyr, " said one resident contacted by telephone.