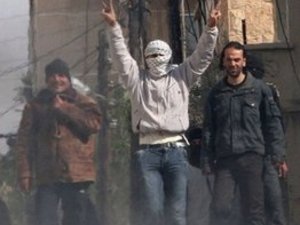 Lebanon, which for nearly 30 years endured Syria's military and political hegemony, is closely eyeing developments in Damascus which will undoubtedly have ramifications on the local scene, analysts say.

"Any change in Syria will have a huge impact on the balance of power in Lebanon," said political analyst Raghid al-Solh, an expert on the Arab world.

Syria has historically viewed Lebanon as part of its territory and for 29 years had a troop presence here until it was forced to end its military domination in April 2005.

The pullout was spurred by massive international pressure over the killing two months earlier of Lebanese ex-premier Rafik Hariri who died in a massive bomb attack that was many blamed on Syria, which has denied involvement.

But while its soldiers have pulled out, Damascus today still exerts great political influence in Lebanon where rival camps are divided on the issue.

One camp is backed by the United States and Saudi Arabia while the other, led by Hizbullah, is supported by Syria and Iran.

"Hizbullah will be adversely affected should the uprising in Syria expand," Solh told Agence France Presse. "An escalation, on the other hand, will give hope to those opposed to Syrian hegemony in Lebanon."

Zyad Maged, political science professor at the American University of Paris, said should the revolt in the southern town of Daraa spread throughout Syria, that would weaken the regime and destabilize its allies in Lebanon.

"Hizbullah is hoping the domestic unrest in Syria ends quickly even if it's through repression," Maged said. "The Syrian regime offers a guarantee for them, geographically at least."

Maged said the current uprisings shaking the Arab world and the evolving geo-political scene in the region greatly limit Syria's capacity to meddle in Lebanese politics.

"In the past, Damascus used to divert attention from its internal problems by keeping Syrian public opinion focused on various crises it would ignite elsewhere,” he said, referring to Syria's role in the conflicts in Iraq, Lebanon and as concerns the Palestinians.

Analysts said a solution to the current political vacuum in Lebanon hinges to some extent on Syria, which may be too preoccupied by its internal troubles to focus on its neighbor.

"The unrest could also spur Damascus to quickly push for the government to be formed in Lebanon so that it can then concentrate on its own problems," Maged said.

For now, both rival camps in Lebanon have kept mum on developments in Syria but their media outlets clearly reflect their diverging positions.

Television stations and newspapers close to the Western-backed camp are giving great importance to the unrest in Daraa while those close to Hizbullah are underplaying it.

As for the Lebanese, their opinions on the unrest next door are visible on social networking sites.

"Heroes of Daraa, Spring is coming your way," reads one message on Facebook.

But Jamal Safieddin, a resident of the mainly Shiite southern coastal city of Tyre, held a different view.

"The Syrian president implemented many reforms," he said. "Those blowing the events in Syria out of proportion are nothing but troublemakers."